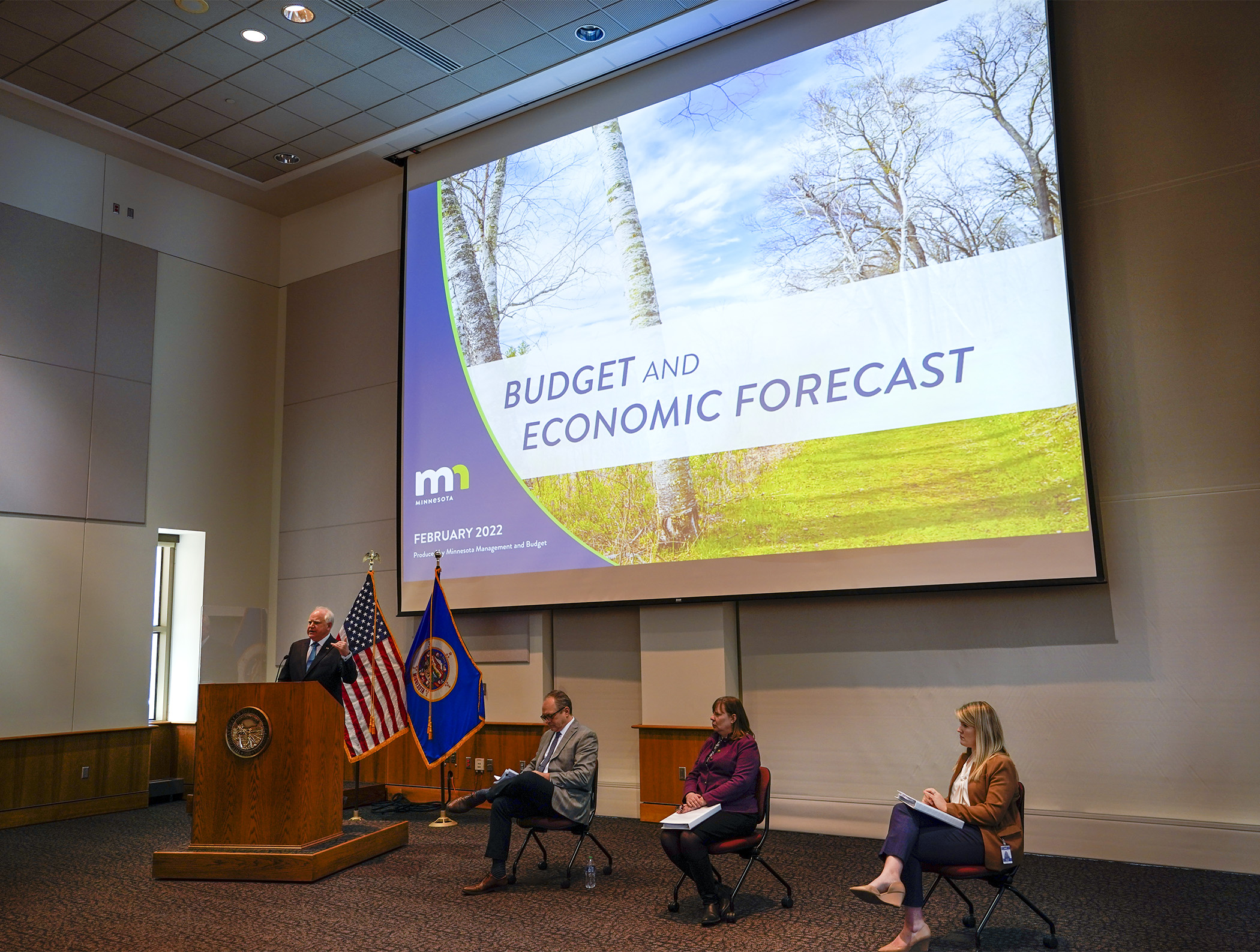 Gov. Tim Walz shares his thoughts on the February 2022 Budget and Economic Forecast during a news conference Monday. The newest forecast projects the Minnesota to have a $9.3 billion surplus. (Photo by Paul Battaglia)

What was expected in November to be a $7.7 billion General Fund surplus is now up to $9.25 billion for the current biennium, according to an updated budget forecast released by Minnesota Management and Budget on Monday.

Incomes, consumer spending and corporate profits are all up while spending is slightly lower in the areas of E-12 education and health and human services. While department officials emphasized that the changes are mostly one-time — they’re strictly for the current biennium — the state remains in the black in planning estimates for the 2024-25 biennium.

That said, Commissioner Jim Schowalter recommends caution because of uncertainty due to inflation and geopolitical conflict. The forecast was put together before Russia’s invasion of Ukraine, and it remains to be seen how that and resultant economic sanctions will affect energy and commodity prices.

“The update part of this is good news,” Schowalter said. “But the uncertainty has not stopped. It’s a challenging time to issue a long-term forecast.”

The state is expected to spend $270 million less this biennium than was projected in the November forecast. The biggest changes are predicted to be in E-12 education (down $158 million) and health and human services (down $108 million).

State Economist Laura Kalambokidis said the invasion of Ukraine, the path of the pandemic, and the rate of inflation add uncertainty to the forecast. Yet she said inflation is currently expected to slow late this year and into next with the resolution of supply-chain issues, consumer demand moving more to services than goods, and changes to monetary policy.

But new COVID variants could alter the economic recovery’s progress. For example, the state’s current economy might have been even stronger had the Omicron variant not dampened consumer spending on services this winter.

Kalambokidis is more optimistic about the employment picture. She said U.S. employment is expected to recover to pre-pandemic levels in mid-2022. While Minnesota’s unemployment rate is currently 3.1% — placing it 12th lowest among states — there are 109,000 fewer jobs and 87,000 fewer Minnesotans in the labor force compared to February 2020, before the pandemic took hold.

“This is a good position for Minnesota to be in,” Gov. Tim Walz said at the press briefing, before turning to his proposal to send rebate checks to state residents. “This gives us an opportunity to get those checks in the hands of folks right now. … We’re in a place where two priorities, the unemployment insurance trust fund and the hero pay [for frontline workers], are possible to do now. … There’s uncertainty, yes, but we’re in a solid position.”

“Today’s forecast shows that Minnesota’s economy is doing well, at least at the surface level, with corporate profits continuing to wildly outpace expectations,” House Speaker Melissa Hortman (DFL-Brooklyn Park) said in a statement. “Now it’s our job to address the challenges that people are facing and ensure that workers and families are benefiting from the economic growth they are helping create. The last two years have been incredibly challenging for so many, and there is significant uncertainty ahead, but we have an opportunity now to truly deliver help for Minnesotans.”

In a statement, House Minority Leader Kurt Daudt (R-Crown) suggested permanent tax relief as the best option for the surplus.

“Minnesota's record-setting surplus gives us more than enough resources for permanent and meaningful tax relief for Minnesotans — including an end to the Social Security tax and replenishing the unemployment trust fund. There's never been a better time to give Minnesotans their money back as they struggle with record inflation, soaring energy bills, and rising gas prices.”

It’s been a year since state projections changed from red to black, as the economic pessimism of late 2020 gave way to a more optimistic forecast in February of 2021. The projected surpluses have been steadily growing since.