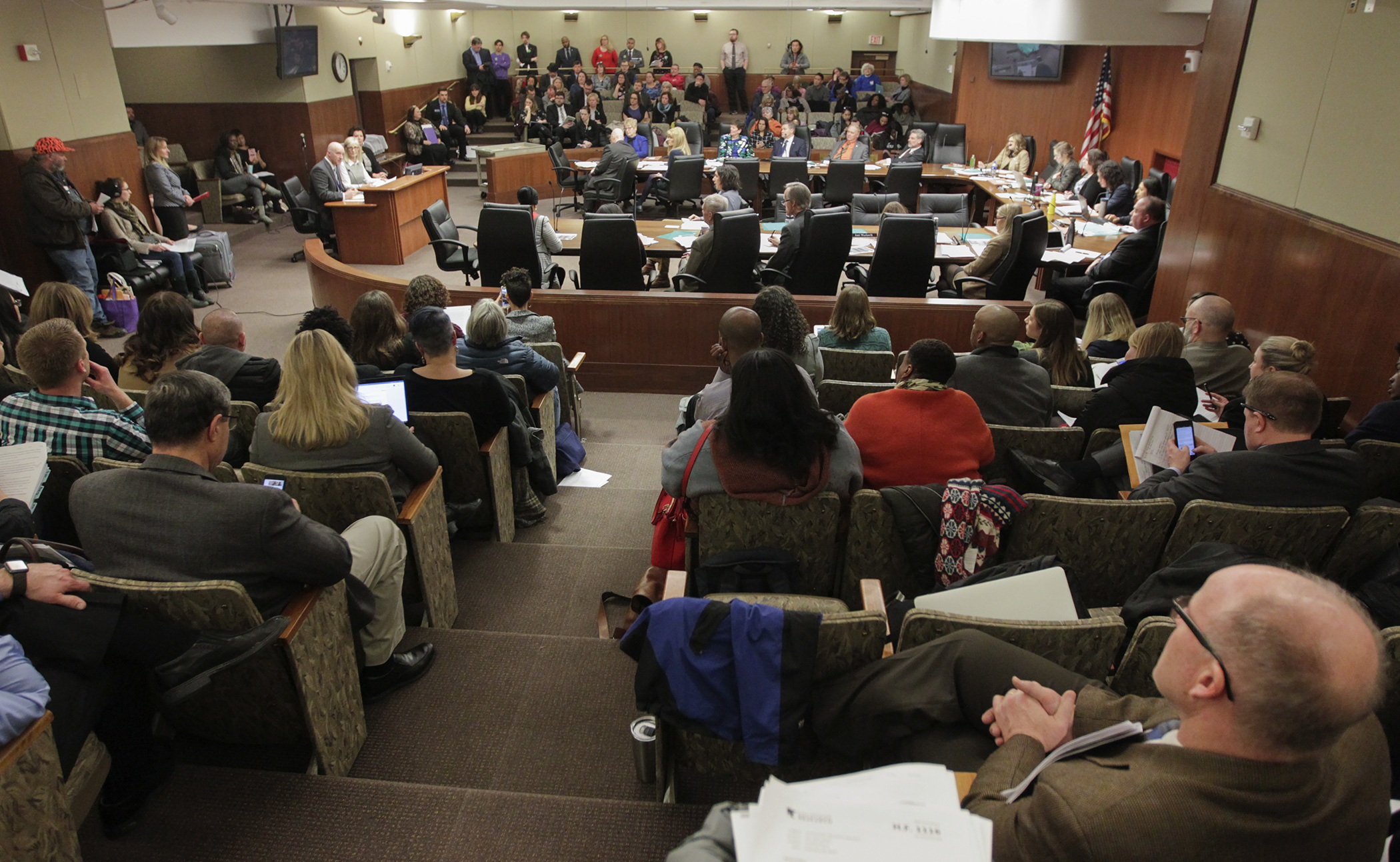 A crowded room listens to testimony in the House Education Policy Committee on HF1329, sponsored by Rep. Mary Kunesh-Podein, which would modify teacher licensure requirements and mentorship requirements. Photo by Paul Battaglia

Some significant changes could be coming to the state’s recently overhauled teacher licensure system.

Sponsored by Rep. Mary Kunesh-Podein (DFL-New Brighton), HF1329 would modify each tier of the system, and limit the placement of students in the classroom of teachers with Tier 1 and Tier 2 licenses.

The bill was held over Monday by the House Education Policy Committee for possible omnibus bill inclusion. The companion, SF1557, awaits action by the Senate E-12 Finance and Policy Committee. Sen. Susan Kent (DFL-Woodbury) is the Senate sponsor.

The current system went into effect in 2017, creating four tiers of teacher licenses. The goal was to simplify the process, create different pathways to enter the profession, attract out-of-state teachers, and, ultimately, address the state’s teacher shortage.

Kunesh-Podein said the changes have led to a lowering of standards for teachers, and reasoned the proposed modifications would ensure teachers have proper preparation and are working toward advanced licensure.

“We don’t need to lower the standards to make the teaching license system easier to navigate, and that’s the bottom line,” she said. “And that’s why I’m introducing HF1329 to fix the tiered-licensing system and restore our high standards for teaching.”

The bill would make a number of changes to each licensing tier, including:

Proponents, including Dennis Draughn, a social studies teacher at Apple Valley High School, pointed to a loophole in the system that allows teachers to forego teacher preparation programs. Draughn cautioned that these preparation programs shouldn’t be waived in order to recruit more teachers.

“Some say the new licensure law will attract much needed teachers of color to the profession by not requiring them to go through teacher preparation and training. But using that as an excuse to lower the standards is unacceptable and insulting,” he said. “We hold high expectations for students in the classroom and we should also expect the same in terms of our practice, teaching as a profession.”

“Please note that less than 1.5 percent of teacher positions in Anoka-Hennepin are filled with Tier 1 and Tier 2 teachers, but these are positions that may go unfilled if the bill was adopted,” she said. “As a former teacher who took a traditional pathway into education, please trust our school districts and our HR professionals to ensure that the best teachers — whether it be Tier 1, Tier 2, Tier 3 or Tier 4 — are before our students.”

Rep. Sondra Erickson (R-Princeton) shared opponents’ concerns that reversing course on the recently enacted tier system would create confusion and be premature, given that there hasn’t been a lot of data collected yet to indicate its effectiveness.

“I think that HF1329 is an insult to all the work that was done,” Erickson said. “We need to give it a chance to work.”

Kunesh-Podein said introducing the bill sooner rather than later was an effort to be proactive rather than reactive. Sara Ford, a researcher for Education Minnesota, complimented her stance by saying that research shows students benefit from traditionally trained teachers.

“Sixty years of academic, peer reviewed research will show you that teachers who’ve had robust training in both content and pedagogy lead to higher academic outcomes,” she said. “Why are we waiting to see if Minnesota’s going to buck that trend?”