After years of being mired in large budget deficits, the House on Thursday dived into the unfamiliar territory of advancing hundreds of millions of surplus dollars.

On a vote of 70-59, the House passed HF3172, which would inject roughly $322 million into the current two-year budget period that began July 1, 2013. Lawmakers last year passed a $38 billion budget for the 2014-2015 biennium. The subsequent largesse materialized when the February economic forecast projected $1.23 billion more coming into the state’s coffers.

Checking in at more 430 pages, the bill addresses a swath of issues ranging from nursing homes to potholes.

“It builds on the responsible budget passed in 2013 and takes the opportunity to address some challenges and make strategic investments in targeted areas to help the state and the people of Minnesota move forward,” said Rep. Lyndon Carlson Sr. (DFL-Crystal), the bill sponsor.

The spending in the supplemental budget is one of a handful of proposals this session that have addressed the surplus. Lawmakers passed $20 million for low-income heating assistance as one of the first items of business when they began the session in late February. They then passed $443 million in tax reductions and deposited $150 million into the budget reserve.

Republicans criticized certain provisions in the supplemental budget and tried to slim down its price tag. House Minority Leader Kurt Daudt (R-Crown) unsuccessfully proposed a delete-all amendment that would have pared down the bill’s proposed spending to $250 million.

“You’re taking that money right out of the pockets of hardworking Minnesotans,” Daudt said. “And they feel it.”

The bill now goes to the Senate where its companion, SF2785, sponsored by Sen. Richard Cohen (DFL-St. Paul), was heard Thursday by the Senate Finance Committee.

The bill is divided into several budget areas, including:

A change to state-funded abortion was successfully added to the health and human services articles of the bill by Rep. Patti Fritz (DFL-Faribault).

Overall, health and human services would receive $91.04 million in increased funding from the General Fund. Taking up a large portion of that budget would be a 5 percent rate increase for providers of disability, senior and other waiver services. The raise would cost the state $80.36 million in 2015. 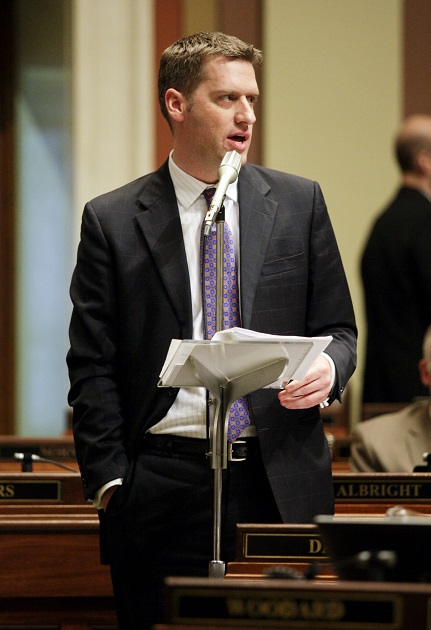 Fritz did not indicate that there would be a cost to her amendment, which would prohibit “state-sponsored health programs” from funding abortions.

Since a 1995 Minnesota Supreme Court decision requiring the state to fund abortions, “Minnesotans have paid nearly $20 million for 62 million abortions,” Fritz said. “It is time to end this practice.”

Rep. Ryan Winkler (DFL-Golden Valley) disagreed. “The Minnesota Constitution requires that all women be treated equally with respect to reproductive choice and that means that just because you are poor does not mean that you don’t have access to the same reproductive choices as every other woman in this state.”

Another amendment related to abortion was successfully amended onto the bill. Rep. Mary Liz Holberg (R-Lakeville) introduced the amendment, which would create a special revenue fund called the “Pain-Capable Unborn Child Protection Act.” It would also specify that an unborn child can feel pain at 20 weeks, prohibit abortion at or after 20 weeks except in certain cases and establish criminal penalties for performing abortions in violation of the proposed act.

Other successful amendments include:

Among the key health and human services funding provisions are:

The education finance provisions would spend $75 million in fiscal year 2015, placing about $54.5 million, or a 1 percent increase, on the general education funding formula. It would increase English language learner services funding by $5.4 million, and spend $5 million to improve school telecommunication access. More than 60,000 eligible students would receive reduced-price school lunches for free, beginning in fiscal year 2015, with $3.5 million in school lunch funding.

“I think this will help school districts get a good start,” he said.

Other education funding and policy in the bill includes:

The bill contains $17.4 million for environment and agriculture spending, of which $15.6 million is from the General Fund. The spending is directed to a variety of programs ranging from funding regulating pet breeders to incentives for farmers to give unsold food to food shelves.

The largest appropriation is $7 million for the SCORE program for local recycling projects. The money comes from an existing tax on trash hauling and disposal that is currently going to the General Fund. The bill would increase recycling goals Twin Cities with the aim of expanding curbside pickup of organic recyclables like food scraps.

University of Minnesota scientists would try to make advancements in the fight against terrestrial invasive species in a new Invasive Terrestrial Plants and Pests Center. The center would receive $3.9 million from the General Fund and $490,000 from the Environmental and Natural Resources Trust Fund, which is supported by Minnesota Lottery proceeds. (A floor amendment reduced the General Fund appropriation by $1.2 million, which was directed to the university’s Veterinary Diagnostic Laboratory to research a pig virus).

Efforts to get farmers to give their unsold crops to food shelves would get a boost from the bill. The Department of Agriculture would receive $1.5 million to incentivize farmers to donate the food they don’t sell to grocery stores rather than throwing it away. Hunger relief advocates testified to lawmakers earlier in the session that Minnesota farmers produce 210 million pounds of vegetables and fruits a year that they either aren’t harvested or can’t be sold after they’re harvested. The funding is built into the Department of Agriculture’s base. 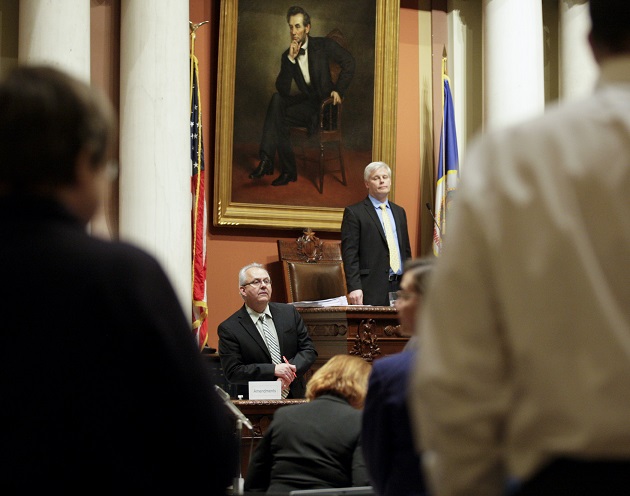 More than seven years of contentious debate would be settled by provisions that call for annual inspection and licensing of cat and dog breeders. The Board of Animal Health would receive $310,000 from the General Fund and $95,000 as a statutory appropriation from the special revenue fund.

Companies that make toys with potentially harmful chemicals would have new reporting requirements. The bill contains a proposal that was originally known as the Toxic Free Kids Act. Companies would need to report to Pollution Control Agency if they make products that contain chemicals like lead or cadmium that are deemed by the Department of health to be a “high concern.” The bill would appropriate $335,000 to the PCA and $13,000 to MDH.

Beekeepers could make a claim for compensation if their bees are killed by a pesticide. Compensation would be eligible in situations where the person who applied the pesticide isn’t known or if the person applied the pesticide in a manner consistent with its labeling. Claims can’t exceed $20,000. The bill would appropriate $100,000 from the General Fund to pay for experts who evaluate the pollinator deaths and $150,000 from the Pesticide Regulatory Account for claims.

Advocates for industrial hemp would have a modest success in the bill. It would direct the Department of Agriculture to examine how other states are implementing the research authority that was granted in the most recent federal farm bill. The measure stops short, however, of proposals from previous years that would have allowed hemp to be grown for commercial products like clothing. MDA is directed by the bill to report to the relevant legislative committees about its finding no later than Jan. 15, 2015.

The Minnesota State Colleges and Universities System would get an additional $17 million in General Fund revenue in fiscal year 2015 to cover the cost of employee compensation associated with the settlement of labor contracts for fiscal year 2014.

Housing finance does not have additional funds to spend in its budget, but that did not stop Rep. Karen Clark (DFL-Mpls) from sponsoring a bill that became the housing article of the supplemental budget.

“Minnesota has actually the worst record in the whole country of racial disparities in terms of who owns homes in our state,” Clark said.

Another portion of the housing article designates $500,000 of already appropriated funds to grants that would create accessible housing for families facing eviction due to a child’s disability.

The jobs and economic development portion of the bill totals $37.4 million in General Fund spending for fiscal year 2015. The bulk of this section contains a one-time $25 million appropriation for a broadband development grant program and an additional $450,000 for broadband mapping across the state. The grant funds would be available to areas of the state that are unserved, those who don’t have access to the federally provider-required download speed of four megabits per second; or underserved, those who don’t have access to the state’s provider-required download speed of 10 to 20 megabits per second.

“Broadband is the future of Minnesota,” said Rep. Erik Simonson (DFL-Duluth), who carried the broadband legislation, in one of several hearings on broadband and telecommunications earlier in the session. “Minnesota lags behind in technology. Good broadband is a need and it’s frustrating to people when they don’t have the tools that they need.”

When broadband goes down in areas of the state without proper broadband coverage, businesses can’t process credit cards and medical facilities cannot submit prescriptions for patients. An amendment was successfully offered on the House Floor by Rep. Ron Kresha (R-Little Falls) that would require an organization working on the state’s broadband mapping to have extensive experience working with Minnesota broadband providers. 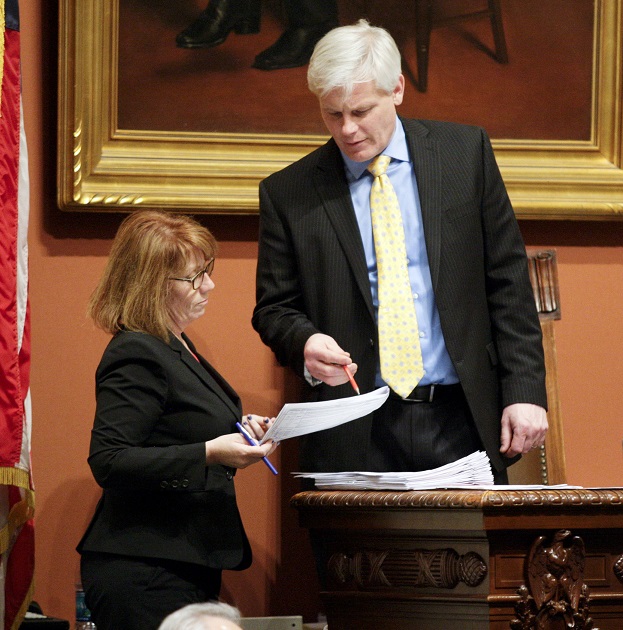 Other provisions of the bill include:

Of the $49.7 million worth of additional public safety spending in fiscal year 2015, $36.5 million would be from the General Fund with the remainder from special revenue funds.

The Corrections Department could receive an additional $30 million of funding in fiscal year 2015 to help with an inmate increase and avoid staff layoffs.

Current law did not include funding for bargained salary increases, and $18.95 million would maintain current staffing levels. Additionally, $11.1 million is needed to deal with a projected shortfall due to a larger than expected prison population bump.

“This came out of the unfortunate fact that we had an incorrect projection of how much jail bed space we would need,” said Rep. Michael Paymar (DFL-St. Paul), chair of the House Public Safety Finance and Policy Committee. “Consequently, the DOC will be renting 300-500 beds from county jails.”

Millions of dollars in emergency funds to fix the state’s pothole-riddled roads are included among $49.6 million in supplemental General Fund transportation funding.

A total of $25 million — $15 million from the General Fund — would be allocated toward filling potholes on Minnesota’s winter-beaten roads and highways. The General Fund dollars would aid local city and county governments to prevent them from being forced to defer other road maintenance to fill an unusually high number of potholes. Another $10 million in trunk highway funds would be used to fix state highways.

When all funds are taken into account, a total of $129 million in supplemental transportation funding is included in the bill.

Other transportation provisions include:

Also included in the bill are policy provisions that would: