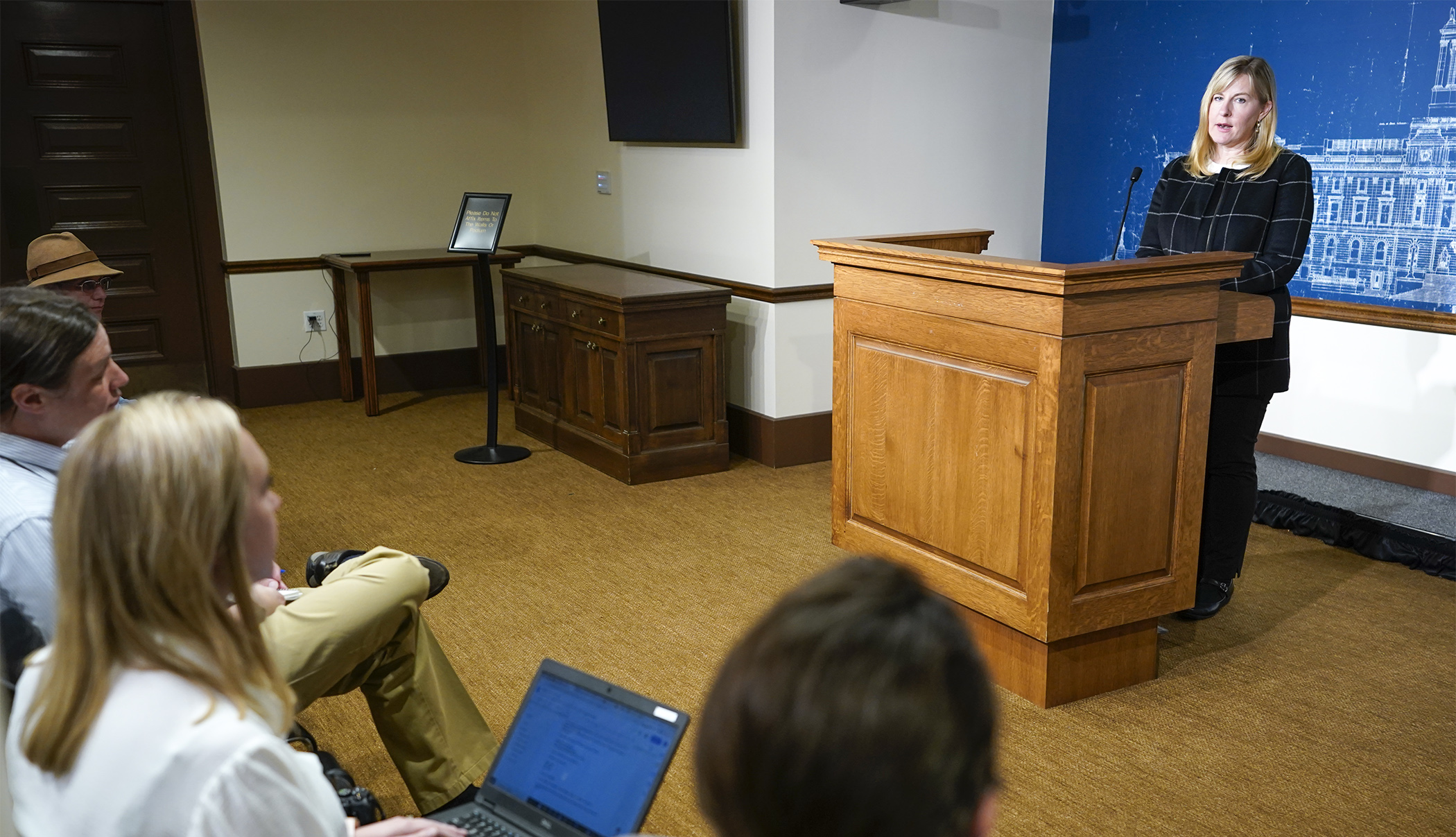 House Speaker Melissa Hortman addresses the media during an April 28 news conference on the agreement struck with the Senate on the UI trust fund/frontline worker pay bill. (Photo by Paul Battaglia)

After months of negotiations, the Legislature has approved a bipartisan agreement on replenishing the unemployment insurance trust fund and providing frontline worker pay.

The House voted 124-5 Friday to pass the conference committee report on HF3166/SF2677* which would authorize $2.7 billion to fully replenish the unemployment insurance trust fund and $500 million for workers at a greater risk of contracting COVID while on the job.

Gov. Tim Walz signed the measure into law Friday evening in order to meet an April 30 payroll tax deadline. The Senate approved the measure 65-1 earlier in the day.

“With the passage of this bipartisan agreement, the Legislature is meeting its obligation to take care of the workers on the front lines of this pandemic and help our businesses avoid a tax increase just as they’re getting back on their feet,” said Rep. Gene Pelowski Jr. (DFL-Winona) in a statement. He sponsors the bill with Sen. Eric Pratt (R-Prior Lake).

The amount available for worker bonuses is $500 million – less than $1 billion passed off the House Floor earlier, but twice the $250 million the Senate had approved.

“Our highest priority was ensuring that workers who were on the front lines of COVID receive the bonuses they were promised nearly a year ago,” House Speaker Melissa Hortman (DFL-Brooklyn Park) said in a statement. “I'm pleased we were able to finally reach an agreement with Senate Republicans to deliver these bonus checks – at double the amount agreed to last session.”

The bill reflects an agreement announced Thursday that would send an estimated 667,000 workers checks of $750. The pool of workers eligible will be defined by the House.

Using the House language is important, Hortman said during a media availability Thursday, because it makes eligible some of the lowest paid workers who were on the front line, including meat packers and grocery store workers.

Setting up the frontline payments program will be tricky, said Rep. Dave Baker (R-Willmar), and he called on colleagues to ensure they spread word in their communities.

Rep. Cedrick Frazier (DFL-New Hope) said the checks to frontline workers will make a real difference, but he was disappointed the money available means they’ll likely receive less than $1,500 each that he had proposed.

The bill also includes a provision that would make a one-time appropriation from the General Fund of $190 million made available for Gov. Tim Walz to use for testing, vaccinations or managing a COVID-19 outbreak after the legislative session ends.

A single expenditure greater than $2.5 million must be reviewed by the Legislative COVID-19 Response Commission and may be vetoed by a majority of either the House or the Senate membership.

“Passing this I think will clear the way for other conference committee reports,” Pelowski said.