Congratulations to the ROCORI students who recently competed in the first International VEX ROCORI Robotics Remote Event. Two of the teams even ranked in the top six among 34 competing teams. Nice job, VEX ROCORI! 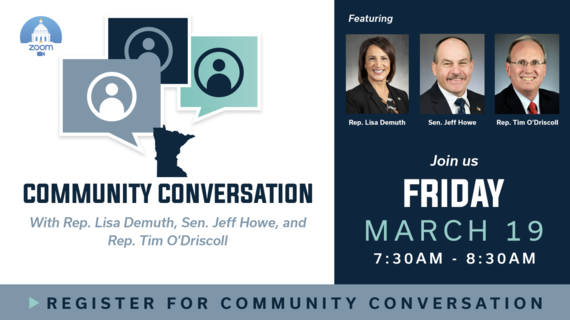 I will be joining fellow District 13 legislators Sen. Jeff Howe and Rep. Tim O’Driscoll to conduct a town hall meeting via Zoom at 7:30 a.m. Friday, March 19. We will touch on a variety of current issues at the Capitol and there will be a block of time set aside for Q&A.

Also, Rep. Dean Urdahl will be joining us from the Litchfield area to share an overview of new social studies standards that are being drafted for children in our public schools. Rep. Urdahl was a history teacher for more than three decades in the NL-S district and has some good insights on this subject.

You can register in advance for this meeting at this link. After registering, you will receive a confirmation email containing information about joining the meeting.

One year of emergency powers

Saturday brings us to one full year the governor has kept his emergency powers over Minnesotans in place. At the same time, COVID-19 vaccinations are up, infection rates are down and states all around the nation are making moves toward more fully re-opening.

One report shows our state is in the bottom 10 nationally in terms of re-opening. By contrast, three of our neighboring states are in the top 10 most “re-opened” and another - Wisconsin - is in the middle. This ranking is based on a daily rating of 11 categories combined to achieve a score. While I cannot vouch for the methodology used or for the rankings themselves, this report does include some interesting information and certainly highlights the differences among states in their approach to re-opening.

This week, House Republicans once again made calls for at least some loosening of restrictions on restaurants and sports and entertainment facilities, including wedding venues. Again, other states, including many run by Democrats, have begun loosening restrictions and we urge the governor to do the same in Minnesota as soon as possible.

As the governor likes to say, let’s follow the data - it points to reopening our state. And, as this happens I would hope we could do so with a greater level of consistency than we have seen in previous executive orders that, for example, favored big-box stores over local retailers and put wedding venues at a disadvantage compared with other events.

We recently received good news regarding our state’s administering of COVID-19 vaccines, with around 70 percent of seniors having received shots. The Minnesota Department of Health indicates it moved up the eligibility timeline to now include more people with specific underlying health conditions, along with food processing workers and those with rare conditions or disabilities that put them at a higher risk. This positive development is another reason our state should take earnest steps toward re-opening.

The deadline to submit public comments on Gov. Walz's California Car Mandate is 4:30 p.m. this Monday.

The governor is seeking to implement this policy through administrative rule rather than the Legislature. If enacted, the California Car Mandate would raise the cost of all new vehicles for Minnesota families by $1,000 or more, reduce consumer choice, and make MN the only state in the Midwest to place these burdensome regulations on auto dealerships. Let your voice be heard on this very important issue. Submit your comments here.

Until next time, have a good weekend and let me know how I can help.