One week from today...

It certainly was a beautiful weekend as we celebrated Mother’s Day! We give honor to mothers, grandmothers, aunts, sisters, and wives who bless us every day with their strength, love, patience, sacrifice, encouragement, comfort, and so much more our entire lives influencing and encouraging us to become the best we can. 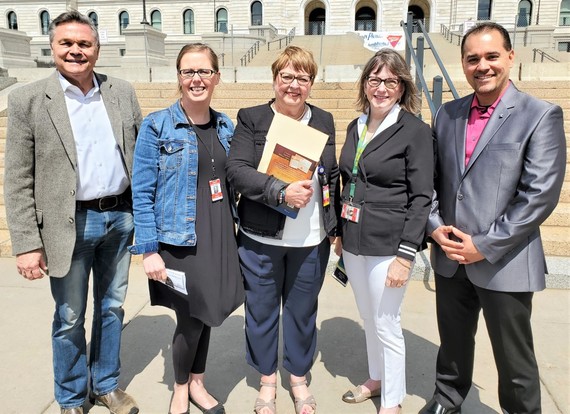 Hearts and minds are the battleground in the ongoing fight for truth as Rep. Lucero and colleague State Reps. were among the crowd who gathered on the MN Capitol steps last week to repent and pray for healing in our state and nation during the National Day of Prayer.

With each the full House and Senate having passed respective omnibus bills to fund state agencies (e.g., departments of transportation, agriculture, K-12 education, higher education, human services, public safety, etc.), most of the activity last week occurred in the various conference committees to rectify the major differences between the House vs. Senate versions of the bills. Current state government is operating on a ~$48 billion budget through June 30 this year. For the various conference committees to accomplish their work, House and Senate leaders must agree to the total budget for the next fiscal year (e.g., July 1, 2021 – June 30, 2023). Once the total number is agreed to,

House and Senate leaders must then agree how much of the total budget will be allocated to each omnibus bill. This is known as spending targets.

The regular legislative session concludes a week from today, Monday May 17. In order to allow enough time for each of the conference committees to negotiate agreements and then for each compromise omnibus bill to repass the House and Senate to be sent to Gov. Walz by May 17, the spending targets needed to have been agreed upon by this past weekend. Nevertheless, the weekend concluded with no spending targets agreement. Because of this fact, most agree there will have to be a special session called some time by mid-June to pass state government funding bills before the current fiscal year expires (e.g., June 30, 2021).

The reason an agreement has thus far failed to be reached is because the House Democrat majority continues their insistence to raise billions in new taxes at a time the state already has billions in surplus tax revenue. The Senate Republican majority is holding strong against the Democrat goal of tax increases on gasoline, license tabs, Main Street businesses, and middle-class Minnesotans. Tax increases are unnecessary at a time the state has more than $4.2 billion in surplus and our next state budget should focus on helping Minnesota families and businesses regain their footing after so many suffered losses in income over the past year.

Last week Gov. Walz announced he will end Minnesota’s COVID-19 restrictions on businesses by May 28 and remove the statewide indoor mask mandate by at least July 1. I’ve included details below:

Step one took place May 7 at Noon relaxing some restrictions, primarily in outdoor settings.

The second step begins May 28. Remaining capacity and distancing limits will come to an end, including for indoor events and gatherings.

The third step takes place once 70-percent of Minnesotans age 16 years and older receive at least one dose of the vaccine, but no later than July 1.

While this is good to see, we also need a transparent and concrete process for ending Minnesota’s peacetime emergency that has been in place for more than one year.

The Legislature is still in session and we should be working with the governor on developing a plan to return to the Constitution and representative system of government. Minnesotans expect a transparent process based on science including metrics and dates clearly articulated instead of Gov. Walz’s subjective and arbitrary wait and see approach. Gov. Walz’s lack of transparency complicates matters and gives the appearance his decision making is rooted not in hard science but instead in political science.

As a member of the House Public Safety Committee, I joined all other members of the House Republican Caucus sending a letter to Ohio Gov. Mike DeWine and Nebraska Gov. Pete Ricketts extending our thanks for their support for law enforcement efforts surrounding the Chauvin trial and events in Brooklyn Center. You can read our letter here.

Law enforcement professionals in our state and around the country have a very difficult job maintaining the peace and ensuring our safety and security. We are very thankful to them!