He is Risen Indeed

We celebrated the Triumphal Entry last Sunday in which Christ rode into Jerusalem presenting himself as Messiah, Good Friday today where we commemorate the crucifixion of Christ at Calvary, and Resurrection Day this coming Sunday where we will celebrate Christ’s triumph over the grave!

I wish you, your family, and your loved ones many blessings this Easter as we remember the great work Jesus did for us on the Cross! 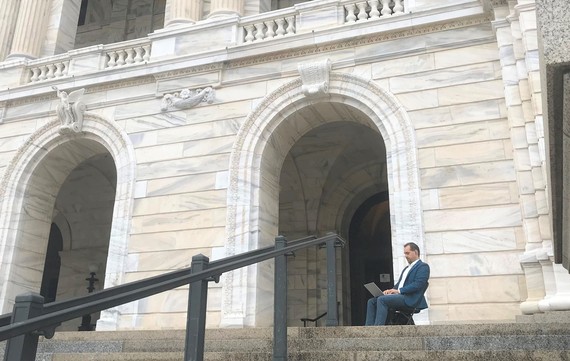 Rep. Lucero participating in the House Floor session remotely via conference call from the steps on the Capitol Mall because only a handful of legislators were permitted into the House Chamber.

Tuesday this week the House passed legislation providing front-line workers with presumptive worker’s compensation coverage in the event they test positive for COVID-19. I voted YES on the bill. Front-line worker occupations include police and fire, paramedics, doctors and nurses, correctional officers, and others and these great people continue working very hard every day to keep each of us safe and healthy during the COVID-19 crisis and they deserve our support.

The legislation addresses concerns damages suffered from the virus would not be covered by the state’s current no-fault workers’ compensation system, a form of insurance that provides salary replacement and medical benefits for workers injured in the course of their jobs. I supported this important legislation to ensure our front-line responders know we have their backs and that they are protected if they are diagnosed with COVID-19 during the course of their work.

The bill that passed represents a compromise agreement made by legislators from all four House and Senate caucuses, and advocates from labor and business groups. The agreement was approved unanimously in an emergency meeting of the Workers Compensation Advisory Council on April 6. The bill also passed the MN Senate and was sent to Gov. Walz for his signature.

To adhere to CDC guidelines, the Speaker of the House only permitted a handful of legislators onto the House Floor. The remainder had to participate and vote remotely via conference call. With that in mind, I brought a folding chair from home that day and dialed into the conference call while sitting outside on the Capitol steps. 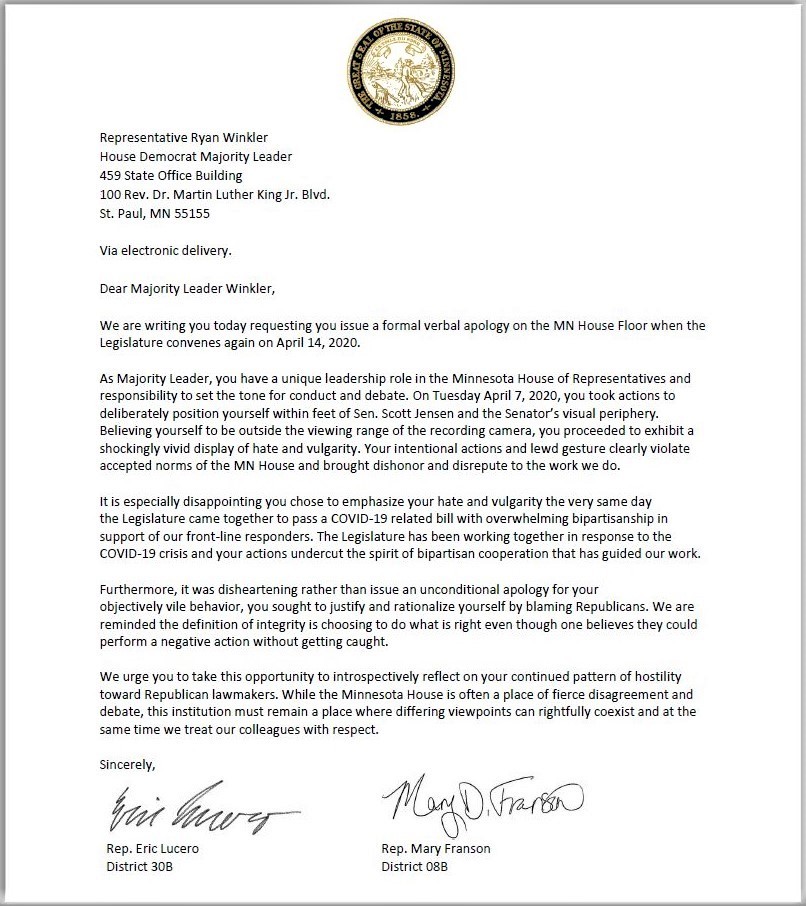 Reps. Eric Lucero and Mary Franson co-authored and sent a letter to Democrat House Majority Leader Ryan Winkler this week A full copy of the letter can be found here.

The bill to extend presumptive worker’s compensation coverage to front-line responders passed the full House with overwhelming bipartisanship Tuesday this week at approximately 1:15 PM. At approximately 1:30 PM, upon leaving the House Chamber literally mere minutes after the vote, Democrat Majority Leader Ryan Winkler observed Republican Sen. Scott Jensen and Senate Republican staff in the Capitol Rotunda immediately outside the MN House Chamber holding a press conference. The Democrat Leader deliberately took action to walk over and position yourself within feet of Sen. Scott Jensen and the Senator’s visual periphery. Believing himself to be outside the viewing range of the recording camera, the Democrat Leader proceeded to gesture a shockingly vivid display of hate and vulgarity targeted at Republicans.

Colleague State Rep. Mary Franson and I co-authored and sent the above letter to the Democrat Majority Leader in response. It’s so unfortunate Rep. Winkler sought to bring the strong spirit of bipartisanship to an abrupt end. A full copy of the letter can be found here.

Recent articles are reporting major flaws in the assumptions and models used as the basis to justify decisions. One such article viewed here discusses the stunning collapse of the flawed modeling. As the extent of the outbreak projections continue to be questioned, another recent article viewed here discusses an army-built field hospital in Seattle, WA is now being dismantled without having treated even a single patient. Original projections of infections and deaths appear grossly overstated and subsequently have been sharply revised downward.

While risks still exist, Minnesota has one of the lowest per-capita coronavirus infection rates in the country. We have much more information now than we did even three weeks ago. Updated data reveals not all segments of the population share the same risk. More narrow measures can and should be implemented to protect those with greater vulnerability rather than blanket the entire state with one-size-fits-all mandates.

The one-size-fits-all policy Gov. Walz is mandating for the entire state is not what Minnesotans want. For example, big-box retailers and national chains are open for business cycling thousands of people through while family-run and small businesses remain locked down. This is not fair and it’s not right. Minnesotans are innovative and many businesses can open and operate according to CDC guidelines to keep people safe. We need to empower individuals so Minnesota can open back up for business.

I’m among the rural legislators who co-authored and sent a letter to Gov. Walz today, seen here, urging Gov. Walz to remove the state-wide, stay-at-home restrictions he extended this week.

Rep. Lucero is continuing to work hard for you. Please continue to reach out with any questions, concerns, or feedback you may have.