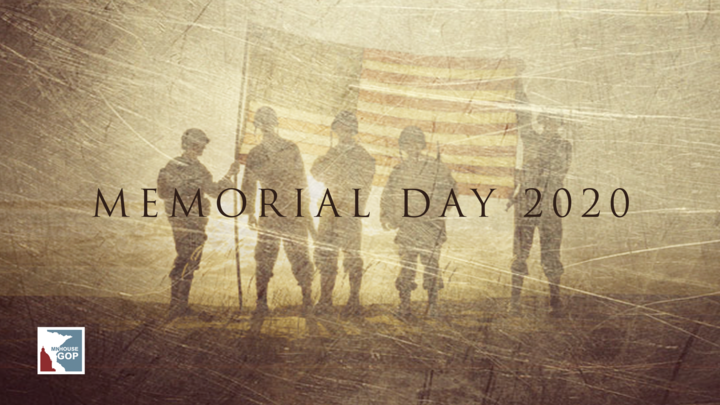 As we approach this highly celebrated Memorial Day weekend, we do so this year with limitation and pause as we face the continued threat from Covid-19. Generations before us have faced adversity not by cause of invitation, but instead thrust upon us with no recourse but to face the challenge head on. Memorial Day is a day in which we as a nation honor those whom have made the ultimate sacrifice to preserve our freedoms, our liberty and the American way of life. For all of our men and women who have past risen to the occasion of military service, public office and public safety, they swear a solemn oath to “uphold and defend the Constitution of the United States.”  When taking that oath, it often becomes one of the surreal moments in life similar to proclaiming your vows and commitments in holy matrimony.

Making these professions of faith and commitment is part of a long storied tradition to proclaim your faith in the future, regardless of the adversities we must overcome. Both marriage vows and swearing a solemn oath of office are premised on honor, fidelity and adherence to those commitments, “so help you God.”

As we go forth this Memorial Day weekend I would like to share a couple of quotes from some of our past icons during times of adversity. President Franklin Delano Roosevelt in his inaugural address in 1933, during the Great Depression, made the following statements at the beginning and ending of his speech:

“So, first of all, let me assert my firm belief that the only thing we have to fear is…fear itself –nameless, unreasoning, unjustified terror which paralyzes needed efforts to convert retreat into advance”

“….the withered leaves of industrial enterprise lie on every side; farmers find no markets for their produce; the savings of many years in thousands of families are gone.

More important, a host of citizens face the grim problem of existence, and an equally great number toil with little return. Only a foolish optimist can deny the dark realities of the moment.

Our greatest primary task is to put people to work. This is no unsolvable problem if we face it wisely and courageously.

There are many ways in which it can be helped, but it can never be helped merely by talking about it. We must act and act quickly.”

Just a few years later, Winston Churchill (whose wife was a Roosevelt) wrote a grave warning in 1936 in an essay entitled “ What Good’s a Constitution?” Churchill wrote:

“ [W]e must not be led into adopting for ourselves the evils of war in time of peace upon the pretext whatever. The word “civilization” means not only peace by the non-regimentation of the people such as required by war. Civilization means that officials and authorities, whether uniformed or not, are made to realize that they are servants and not masters.

Socialism or overweening State life, whether in peace or war, is only sharing miseries and not the blessings. Every self-respecting citizen in every country must be on guard lest the rulers demand of him in time of peace sacrifices only tolerable in a period of war for national self-preservation”

The sacrifices being asked [demanded] of our citizens today from our leaders may be necessary, but they should never become commonplace or accepted as a “new normal.” Accepting defeat during a time of adversity, harkens to the unnecessary fear that Roosevelt referred to. Suspending our constitutionally guaranteed rights during a peacetime emergency, presents the threats Churchill eloquently expressed.

May there be many blessing to you and your family during this important peacetime Memorial Day Weekend.