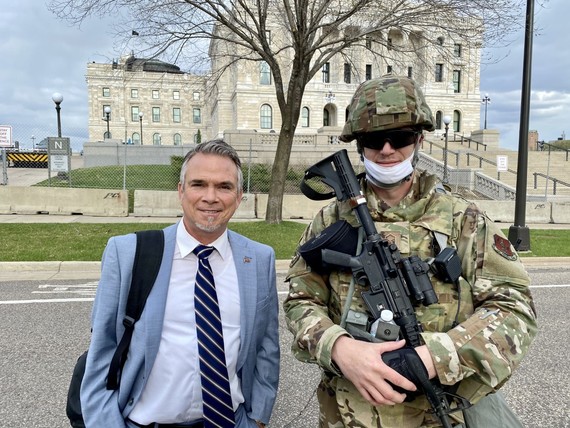 It was my pleasure on Tuesday to stop and thank this National Guard member from Delano stationed at the Capitol for his service and dedication to keeping our state safe.

While my last email laid out numerous areas of concern for the House majority’s proposed two-year state budget (namely raising taxes by billions of dollars at a time of historic state surplus), I would like to start this letter by mentioning a positive, bipartisan development.

Earlier this week, an amendment offered by House Republicans to restore civics as a priority in Minnesota successfully was amended onto a K-12 education omnibus package which received approval from the full House.

This proposal (H.F. 562) makes civics a credit-bearing subject for Minnesota high school juniors or seniors in order to raise the relevance of the subject in Minnesota schools and mitigate a growing lack of civics knowledge among younger generations.

If you are wondering why this is so important, the author of this civics bill (our neighbor to the west, former social studies teacher Rep. Dean Urdahl) has cited a quote from a report that pretty well sums up our situation: “Dangerously low proportions of the public understand and trust our democratic institutions. Majorities are functionally illiterate on our constitutional principles and forms. The relative neglect of civic education in the past half-century – a period of wrenching change – is one important cause of our civic and political dysfunction.”

The simple fact is what we’re doing today isn’t working and we are failing our children. How bad is it? The National Association of Education Progress (NAEP), the nation’s report card, reports that our students are graduating with 23 percent proficiency in civics. In other words, over 75 percent of our graduates leave high school not knowing how our government functions.

In other words, we are sending 77 percent of our high school graduates into the world constitutionally illiterate, ill-prepared to carry on our republic. While the statewide gap in civics knowledge is clear, it is even more pronounced among minority students. Many live in a civics desert, devoid of opportunities, which handicaps their future ... and ours as a state.

Minnesota currently requires 3.5 credits of social studies, encompassing at least United States history, geography, government and citizenship, world history and economics to satisfy the academic standards. Civics is supposed to be taught in our schools, but the lack of assigned credit and lack of proficiency suggest there is room for improvement.

As important as STEM courses are to our children’s education, there are serious consequences for shorting civics. We need to find a more balanced approach. When taught effectively, civics can equip students with the knowledge and dispositions necessary to become informed and engaged citizens.

This proposal we amended to the K-12 bill provides flexibility to school boards to help make that happen. I will continue advocating for this language to be included in the omnibus K-12 education bill when it makes its way through a conference committee and comes back to the House for a vote on final approval.

Stay tuned for more news on budget bills next time. Negotiations are about to get serious and I look forward to finding solutions for a finished product worthy of broad, bipartisan support.