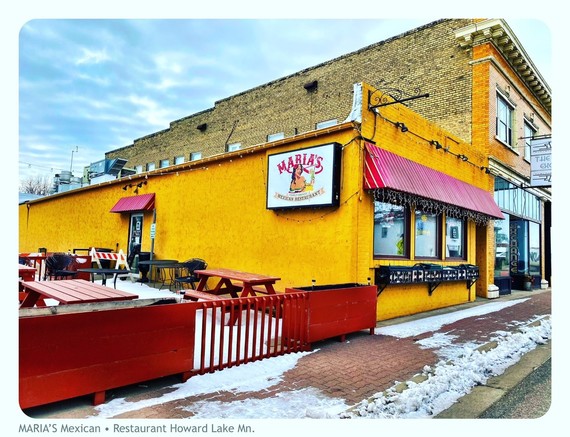 Stopped and had lunch at this gem of a place in Howard Lake while traveling the district this week. The food at Maria’s was spectacular! Please be sure to patronize local restaurants ... they need our business more now than ever.

Good day from the Minnesota House of Representatives, where committee work remains our main focus during these early stages of the 2021 session.

Among my committee assignments is a position on Industrial Education and Economic Development Finance and Policy. One of our top areas of emphasis on this committee is re-emphasizing skilled labor/trade careers as attractive opportunities for students. Our committee recently conducted a hearing for a bill that focuses on training teachers on how to instruct tech education and that proposal was well received.

As our state has placed increased priority on STEM courses and four-year liberal arts degrees over the years, the industrial arts classes have been marginalized. It is long past time to reverse that trend so students can take advantage of the great opportunities that await, especially as our state faces a shortage of skilled workers. My wife and I have a son who, after starting a year at college, switched paths from a four-year school to the trades and is now quite successful at just 20 years of age. He is hitting stride in his new career, earning a living and did not incur the massive student-loan debt that is hindering so many people today.

Look for more as other bills on this subject develop as we continue working to do more to match the training students receive with the demands of our real-life workforce.

In other news, Gov. Tim Walz is seeking to implement California’s mandatory auto-emission standards on vehicles sold in Minnesota through the administrative rule making process. The Minnesota Pollution Control Agency has begun hosting public information sessions on this subject.

This push is rather concerning to me on a number of levels. Bringing California auto regulations to Minnesota will raise consumer cost significantly and limit choices, with fewer vehicles that Minnesotans want/need/demand (trucks and SUV’s) available on dealer lots. If the MPCA turns over auto regs to California, will they also do big rigs, boats, lawnmowers, snow blowers, etc., that California regulates?

By adopting California car mandates laws, Minnesotans will have no voice. Bureaucrats on the West Coast will tell us what to do and we can’t change it. It also is just another example of the governor bypassing the Legislature to exert his agenda. If he wants to emphasize electric cars, then he should work with the elected legislators who serve as the voices of the people they represent.

A better strategy for getting Minnesota drivers to switch to electric vehicles would be to work on policies that drive down their cost and increase demand. Instead, the governor is forcing the market through initiatives that damage consumers and would be crushing to our state’s auto dealers, many of whom already have faced economic distress during his shutdown orders.

On a final note, I continue to receive questions from constituents regarding the governor’s emergency powers, which he has now kept in place for more than 10 months. I have spoken and voted against the governor’s emergency powers and unconstitutional mandates close to a dozen times. Unfortunately, House Democrats in the majority have blocked each and every attempt by the minority to restore the Legislature as the third co-equal branch of government that it is – and also are preventing Minnesota families and businesses from receiving the representative system of government they deserve. I’m still working to do all that I can to end the governor’s power-hungry behavior so that we can have 134 legislators involved in the decision-making process instead of just one person ruling our state.

Until next time, please stay in touch and let me know what I can do to help.