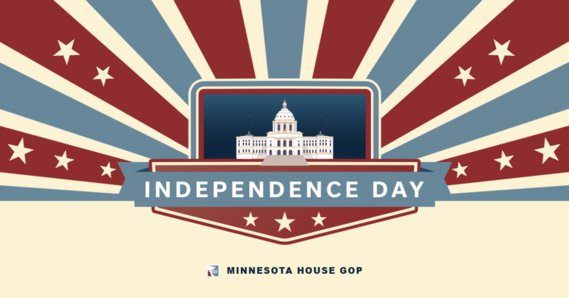 Before we get to legislative business, I would like extend a sincere thank you to everyone who donated and helped make the recent Delano Lions Club food/supplies drive a major success! Your efforts are greatly appreciated to help people devastated by the destruction of their community in Minneapolis.

As for news from the House, the Legislature recently conducted a special session, but there really wasn’t much special about it. We adjourned after eight days with most of the big issues unresolved, including a bill to distribute federal relief and a package related to public safety/criminal justice.

The governor did use the occasion to extend his emergency powers by another 30 days despite attempts by the House minority to put an end to his unilateral powers.

Here is an overview of these and other subjects:

The special session’s derailing largely can be traced back to House Democrats (at the urging of the governor) breaking a bipartisan compromise to allocate $841 million in federal CARES Act relief for local units of government. Here is how it went: All four legislative caucuses reached an agreement on the best way to distribute this funding. The Senate passed the bipartisan compromise with nearly universal support (62-4).

Ultimately, the governor came around and late last week announced he would use his emergency powers to distribute the full $841 million in federal CARES funding in line with the compromise legislation that was agreed upon during the special session. The local units of government now will receive their money, even if it was unnecessarily delayed by the governor and House majority breaking a bipartisan agreement.

The death of George Floyd brought to a head some issues that need to be addressed regarding criminal justice and public safety in general. We need reform that will allow us to make improvements while continuing to fully support our various branches of law enforcement.

Provisions with bipartisan support were proposed during the special session, from the duty to intercede, to banning chokeholds and providing departments with greater recourse when officers violate laws and training standards.

But, instead of working to build consensus on these areas of agreement, the House majority pushed partisan proposals and rejected good faith offers that included bills they personally had written. It’s disappointing that, when they were given the opportunity to pass bipartisan bills, they took an “all-or-nothing” approach, deciding nothing was better than passing things that had full agreement.

It should be noted that a project of this magnitude was difficult to sufficiently address in a brief special session. This is a complicated issue, especially amid COVID-19 restrictions and on such a short timeline in the wake of Mr. Floyd’s death. This subject deserves to be taken on during a full session when proposals are able to receive full testimony and scrutiny in a more proper meeting environment.

In the meantime, I want to thank our law-enforcement officials for all they do to protect us. It is clear that, without them, chaos ensues. Efforts to defund the Minneapolis police may be one reason violence has escalated in Minneapolis, where an absurd 1,600 gunfire reports were filed within a recent 30-day span.

A capital investment bill (aka, bonding) to fund construction projects throughout the state also remains unfinished at this point. This could be part of another special session this summer, such as if/when the governor looks to extend his emergency powers by another 30 days in mid-July.

On a more positive note, the Minnesota Department of Employment and Economic Development has just  begun accepting applications to the Minnesota Small Business Relief Grants Program recently approved by the Legislature.

This program will provide $10,000 grants to small businesses that have been impacted by the COVID-19 pandemic. Businesses with 50 or fewer full-time employees are eligible. Half of the funding will go to businesses in Greater Minnesota and half to businesses in the seven-county Twin Cities metro area, as required by law.

The application period runs until 5 p.m. this Thursday. To be eligible, businesses must have a permanent physical location in Minnesota and be majority owned by a permanent resident of Minnesota. Businesses must be able to demonstrate hardship as a result of the COVID-19 outbreak. Additional eligibility requirements and application information can be found online at DEED’s Small Business Relief Grants page.

Look for more news soon and until then, let me know how I may assist. Have a great Independence Day week as we celebrate our great nation this July 4th and please be safe!