Alex, Hannah, and Erin came by on the Minnesota Academy of Physician Assistants’ Day on the Hill.

Saint Paul College faculty met with me to discuss their priorities.

I had the opportunity to spend time with students enrolled in the U of M School of Public Health’s Social Inequalities in Health class, a topic of key interest to me.

Black History Month – One Year of the UBLC

As we look back on Black History Month, check out this video on the House DFL’s Facebook page where I reflected on the first year of our United Black Legislative Caucus, and looked ahead to this year’s priorities. You can find the video here. 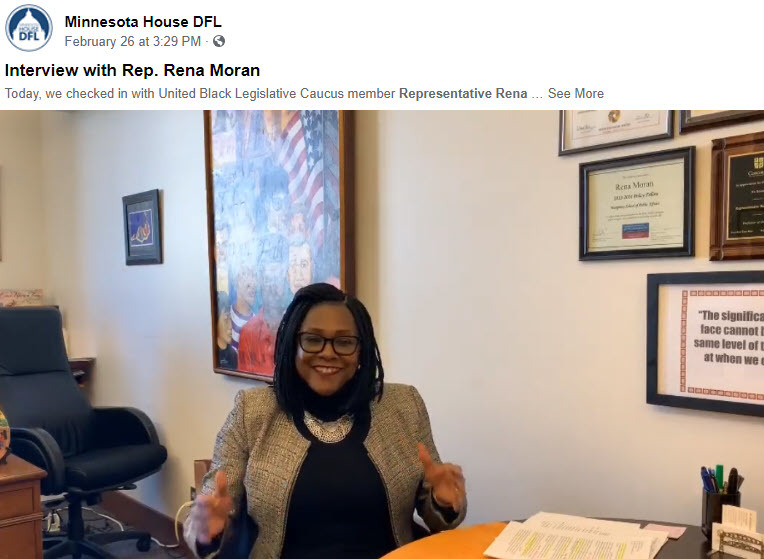 Last week on the House Floor, we advanced several of our key priorities we share as House DFLers. On Wednesday, we approved the Alec Smith Insulin Affordability Act, which would ensure Minnesotans with diabetes have access to affordable insulin when they need it most. The bill is named after Alec Smith, a young man from Richfield who passed away in 2017 at the age of 26 when he aged off of his parents’ health insurance and was forced to ration his insulin that he could no longer afford due to its high cost. Under the Alec Smith Act Minnesotans struggling to afford their insulin could apply for and receive an emergency refill of insulin at their pharmacy. In addition, they will be connected with options for long-term affordable insulin coverage. Alec’s Bill would also cap co-pays for insulin at $30 per month for patients on state-regulated health insurance plans. It's time for everyone - including the drug companies who continue to make massive profits off of their high prices - to be part of the solution. House DFLers are committed to lowering the costs of prescription drugs and making affordable health care a reality for everyone.

Also on Wednesday the House approved legislation to protect the privacy of voters participating in our presidential primary. As the law is currently written, the information about which party’s primary a voter chooses to vote would be shared with all of Minnesota’s major political parties and could be for sale to the highest bidder. The bill  would give voters the choice to opt-out of sharing their party preference in the presidential primary and instead restrict access of that data only to a national party representative, only so they can verify participation in the primary. In Minnesota, we should encourage maximum civic engagement, and no one should think twice about voting because they feel like they’re giving up their privacy. I supported the bill.

Thursday, we approved two key pieces of gun violence prevention legislation: expanded criminal background checks and red flag laws. These bills would help keep guns out of the hands of people who have proven themselves to be dangerous. These common-sense measures are working well in other states, and are supported by law enforcement, health professionals, and the vast majority of Minnesotans.

I'm so inspired by the Minnesotans who have come to the Capitol over and over again advocating for changes to our laws to stop senseless gun violence. These are proven solutions and I'm proud to support them.

Recently, I’ve participated in the announcements of two separate proposed amendments to the Minnesota Constitution; one aimed at healing trauma of Black Minnesotans from the past, and one aimed at strengthening opportunities for children of color now.

I joined Saint Paul Police Chief Todd Axtell and several legislative colleagues to launch an effort to remove references to slavery and involuntary servitude from the Minnesota Constitution. Since statehood 1858 the constitution has prohibited slavery, but an exception still exists for “punishment for a crime of which the party has been convicted.” While the language is largely obsolete, it’s relevant today because our criminal justice disparities and mass incarceration epidemic have direct roots to our nation’s past when slavery was practiced.

Black Americans still carry multigenerational trauma from that dark period in our nation’s early history, and as the great-great-granddaughter of slaves, this issue is deeply personal. This language has no place in our constitution – period, and I’m committed to ensuring Minnesotans will get to weigh in on the ballot this November. Here’s a story from MPR News for more.

I also joined former Supreme Court Justice Alan Page and a bipartisan group of lawmakers to announce a proposed constitutional amendment to guarantee every Minnesota child the fundamental right to a quality public education. It’s no secret that our state has a significant opportunity gap between children of color and those from low-income backgrounds, and their white counterparts. Despite our best efforts, it remains one of the worst in the nation.

Every single child, no matter their zip code, neighborhood, or cultural background should be encouraged to reach their full potential. It’s time to fundamentally reframe our discussion about education, and truly aspire to give our kids the best opportunities to achieve in the classroom. The Star Tribune covered the announcement here.

Amending the Minnesota Constitution is a proposition none of us should take lightly, but our constitutional is a moral document.  These inequities must be addressed, and at this point, these proposals are an appropriate means to do so.

I’m co-chair of the legislative People of Color and Indigenous Caucus, and last week we announced our agenda for the 2020 session. Our state is facing significant disparities that we cannot ignore. Our agenda supports transformational change in social, racial, and economic justice.

We’re 19 members strong and are committed to ensuring our communities’ voices are at the table when decisions are made at the Capitol. We stand together across race, culture, and experience, united in the goal of making Minnesota a better, more equitable place to live. Read more about the details of our agenda here and watch our press conference here.

If you know of anyone else who might like to receive these updates – perhaps a friend, coworker, or neighbor interested in the Legislature – invite them to subscribe here. Also, if you don’t already do so, I invite you to “like” or “follow” my Facebook page here. Please reach out with your viewpoints on issues that matter to you, or if I can ever be of assistance. It’s an honor to represent you at the State Capitol.