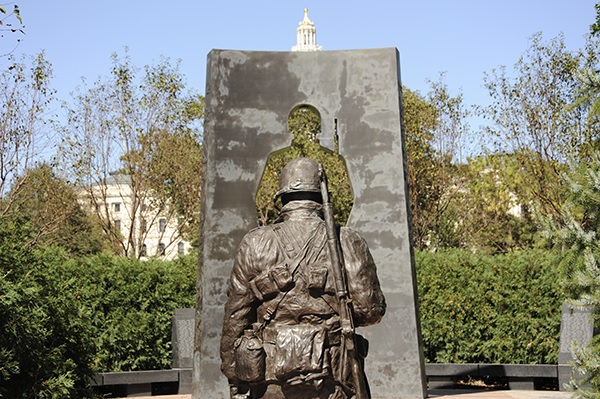 The Korean War Veterans Memorial on the Capitol Mall in St. Paul. HF4661 would increase a cap on municipal spending on Memorial Day celebrations in state law since 1909. (House Photography file photo)

World War I had not occurred when a law was enacted allowing cities to have an “appropriate observance” of Memorial Day each year “in the annual commemoration of the noble and valiant deeds of the nation's soldier dead.”

That 1909 legislation capped ceremonial spending at $300.

When the law was enacted, that’d provide for a fancy gathering. Today, it might get you a few patriotic-colored cakes, flowers and balloons.

Sponsored by Rep. Dave Lislegard (DFL-Aurora), HF4661 would increase the cap to $10,000 annually. The bill currently targets cities with 75,000-plus residents; however, Lislegard said an amendment is forthcoming to make any city eligible.

Approved Wednesday by the House Local Government Division, the bill goes to the House State Government Finance and Elections Committee, where it is scheduled to be heard Friday. There is no Senate companion.

Steven Biondich, who serves on the Biwabik City Council, supports the bill.

“We want to be proactive as we come into a demographic change with our veteran organizations and the way we conduct our Memorial Day services. There was some stuff in the news in recent years where this has been limiting and I thought to myself this could affect us very soon. We’re going to need some help from our cities and municipalities to get these services done.”