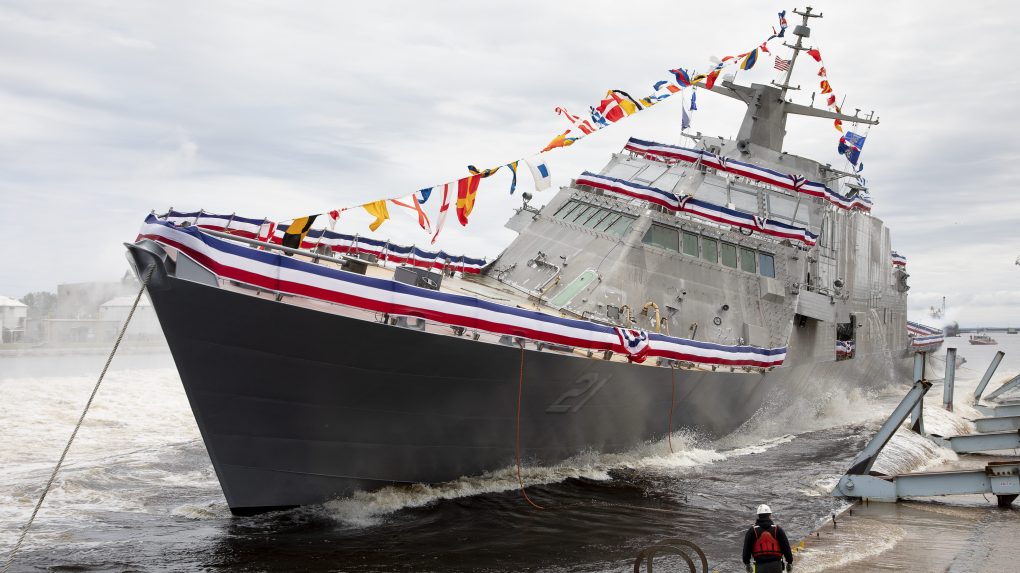 The USS Minneapolis-Saint Paul, shown being launched in 2019, is set to be officially commissioned later this year. HF3315 would commit $200,000 for support of the ceremony. (Image courtesy Lockheed Martin Corporation)

There will soon be sailors taking to the seas in a naval ship named for the Twin Cities.

The long-awaited commissioning of the USS Minneapolis-Saint Paul into the Navy will happen in Duluth later this year at a yet-to-be announced date. The House Labor, Industry, Veterans and Military Affairs Finance and Policy Committee laid over a bill Wednesday that would commit $200,000 for support of the ceremony.

HF3315 could appear in an omnibus bill.

“As a Navy dad, it’s an amazing thing to think that young men and women will be serving on this defending our country,” said Rep. Jim Nash (R-Waconia), the bill sponsor. “It’s going to be a really fun event that, I can’t stress enough, is probably a once-in-our-generation opportunity to do this, and I think it’s something we want to stick the landing on.”

Its companion, SF3040, is sponsored by Sen. Michelle Benson (R-Ham Lake) and awaits action by the Senate Veterans and Military Affairs Finance and Policy Committee.

The USS Minneapolis-Saint Paul, designated as LCS 21, is a littoral combat ship developed for combat near shorelines, according to Brian Skon, vice president of events for the Minnesota Navy League and chair of the ship’s commissioning committee.

Skon said the crew will consist of about 75-80 people, although the ship can carry up to 120 based on the mission. He said the ship is 400 feet long and powered completed by jet engines.

“The mission of this ship is to get up close and personal with our adversaries; to be very recognizable, very visible,” Skon said.

The ship’s hull was christened on June 15, 2019 by Jodi Greene, a Northfield native who was the deputy undersecretary of the Navy at the time. The Navy accepted delivery of the ship at the Fincantieri Marinette Marine in Marinette, Wis. on Nov. 18, 2021.

The LCS21 is the second naval vessel to honor the Twin Cities. The submarine USS Minneapolis-Saint Paul was decommissioned in 2007. Both cities, Minneapolis and St. Paul, have also been honored twice before.

The submarine USS Minnesota is currently in use by the Navy.

“This is a great opportunity to bring Minneapolis and St. Paul together; to get together, give us an opportunity to celebrate one of the things that, I think, our country is known for, and that is strength,” said Rep. Donald Raleigh (R-Circle Pines). “By supporting the Navy, by supporting the commissioning of this ship, we are showing strength. I believe that’s what Minnesota and the United States needs right now.”